Sheikh Ahmed Zarruq (1442-1493) was a Shadhili Sheikh and founder of the Zarruqiyye branch of the Shadhili order. He was born on the 7th June 1442 (846 of the Islamic ‘Hijra’ calendar) in a village in the region of Tiliwan, a mountain area of Morocco. his full name was Shihab ud-Din Abu al-Abbas Ahmed b Ahmed b Muhammad b Isa al-Barnusi al-Fasi. He studied the traditional Islamic sciences such as jurisprudence, Arabic, traditions of the Prophet and wrote extensively on a number of subjects. His most famous works to have come down to us are his commentaries on Maliki jurisprudence and his commentary upon the Hikam of ibn ‘Ata Allah.

He travelled East to the Hijaz and to Egypt before taking up residence in Misurata in Libya a place which he loved and where he passed away in 899 (1493). 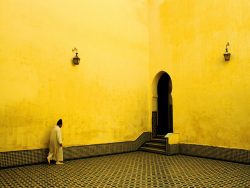 On a beautiful Fajr morning on the 22nd of Muharram in the year 846 A.H (June 7th 1442 CE), in the village of Tiliwaan, was born a man the ‘Aarifeen would forever praise and look to for spiritual growth. His name was Ahmad ibn Ahmad ibn Muhammad ibn ‘Isaa Al Barnoosi Al-Faasi, known as Az-Zarruq. His parents died while he was one week of age due to a horrible outbreak known as ‘Azzunah. His maternal grandmother Umm Al-Baneen, a woman he would always express absolute love and gratitude for, raised him. Umm Al-Baneen had memorized the Qur’aan and studied Islaam. She was a Zaahida and raised her beloved grandson as one as well. Imaam Az-Zarruq describes his grandmother as such,

“She instructed me how to make Salaah and ordered me to do so at the age of five. At the same age she sent me to the kuttaab (Qur’anic School) and started teaching me about tawheed, tawakkul, eemaan, and deen in a curious method. One day she prepared food for me. When I came back from the Kuttaab for luch she said, ‘I have got nothing for you to eat. However, provision is in the treasure of the Almighty! Sit down and let us ask from Him!’ We stretched out our hands to the heavens and began praying to Allah . Then she said: ‘Go and look, aybe Allah has put something in the corner of the house.’ We began to search and how glad I was when I found the food! She said: ‘Come and let us thank Allah before we eat, so that our Lord may give us more from his Mercy!’ We thanked Allah and praised Him for an hour then we commenced eating. She used to do many times till I grew up.”

“Encouraging me to make Salah, she used to put a dirham on my pillow so that I might see it when I opened my eyes in the morning. She would say, ‘Make fajr then take the dirham.’ Her idea was that the dirham would gelp me to pray and keep me away from corruption and prevent me from looking at what is in other people’s hands when I desire to buy something.”

He continues to write, “After I had learned some chapters of the Qur’aan she began teaching me how to write and read. She would warn me against poetry saying, ‘He who neglects science and deals with poetry is like he who exchanges wheat for barley.’

His family were diligent in their remembrance of Allah as well as studies. When he was a child he sat in the market listening to some story-tellers when his uncle told him, ‘No one sits here save the idle!’ Shaykh Ahmad stated that he never listened to the story-tellers again. His grandmother sent him to be an apprentice of a cobbler. Later, however, at the age of sixteen Imaam Zarruq went to the epicenters of Islamic sciences in the west, the Qarawiyyeen University and the ‘Inaaniyyah college. There he studied Maaliki Fiqh, Hadith, Usool, and Arabic grammar. He had over 35 well known established scholars he sat under in these institutes. Some of them include Imaam Abdur-Rahmaan Ath-Tha’labi (died in 873 AH), Muhammad ibn Husain (As-Siraaj As-Saghir died 887 AH), Muhammad ibn ‘Ali Al-Bisti Al-Qalsaadi, and Abdur-Rahmaan Al-Qawri.

Some of His Travels and Studies

In the year 873 AH he left for Hajj. Along his travel he visited Cairo and other famous cities within the region. After staying for 2-3 years in Medinah, he left to continue his studies in Cairo. He studied at the feet of the Muhaddith (Doctor in Hadith), Shaafi’i Faqih (Jurisconsult), Mufassir (Exegete of the Qur’aan) Imaam Muhammad As-Sakhaawi (831-902 AH), who was the student of the leader of the believers in the science of hadith, Al-Haafith Ibn Hajr Al-’Asqalaani. He also studied beneath Nur-ud-Deen As-Sanhoori, Abdur-Rahmaan Al-Qabbaani, Shams-ud-deen Al-Jawjari, Nur-Ad-Deen At-Tanasi, Abdur-Rahmaan ibn Hajr, and Ahmad ibn ‘Uqbah Al-Hadrami (died 895 A.H). He studied Sahih Al Bukhaari, Al-Ahkaam As-Sughraa, Bulugh Al-Maraam (which he took from the hands and tongue of Imaam As-Sakhaawi, the student of its Author Ibn Hajr), Al-Madkhal of Ibn Al-Hajj, Al-Ihyaa of Al-Ghazzaali, Ar-Risaalah of Al-Qushayri and many of the works of Ibn ‘Ataa’illah Al-Iskandari. In the book Ad-Daw Al-Laami’, Imaam As-Sakhaawi (rahimahullah) states, “He travelled to Egypt, perfored Hajj, became a Mujaawir at Medinah. He settled in Cairo for about one year. Therein he studied Arabic and Usool under Al-Jawjari and others. He read Bulugh Al-Maraam under my supervision and researched in Al-Istilaah (the science of hadith) with me. He accompanied me in certain things and I benefited from a group of his fellow countrymen.”

It was said by the author of Tabaqaat Ash-Shaadhiliyyah Al-Kubraa about Imaam Zarruq in Cairo, “When the scholars and learned men of Egypt heard of his arrival they came to him and attended his lectures. He started teaching at Al-Azhar. About six thousand men used to attend his lectures from Cairo and its suburbs in Al-Azhar. He became head of the Maalikis and their department at the University. A high well-made chair was specially placed for him on which he used to sit and dictate his lessons. This chair still exists at the Western Quarter. He was of great power and influence with the Egyptian princes and was always welcomed by all of them.” He took tasawwuf from the scholar Ahmad ibn ‘Uqbah Al-Hadrami who was a scholar in the Shaadhili and Qadari branches. He later established himself in the city of Misurata, Libya. Misurata was the third largest city in what is called Libya today. It was a port city that connected Italy and Europe to Northern Africa. It was also a city that was on the path from West Africa to Makkah and Medinah, hence many pilgrims would stop and seek shelter, buy goods, and listen to the religious lecturers in the Masaajid.

Why Imaam Az-Zarruq chose Misurata is not absolutely known. Ibn Naasir in his “Rihlah” wrote, “Az-Zarruq was asked for his reason for moving to Misurata and he responded thus, ‘This is a matter beyond thought, not accompanied by any determination nor decided for any particular reason that we know. It is a mere accident whose being has appeared and whose existence has become real, obeying what Allah demands.”

After establishing himself in Misurata he traveled frequently to Algiers and Egypt. He gave lectures and busied himself with the remembrance of Allah . In 894 he made Hajj for his third time. On his way back he lectured in Al-Azhar and visited old companions. He stopped in a town called Al-Minyaa, giving lectures and reviving the Islamic spirit. On the 18th of Safar 899 AH, Shaykh Zarruq died while in the state of Khalwah at the age of 54. The community he lead built a large Zaawiyah for him and his students. Many of his students, who are principally Shaadhili, started a sub-order known as the Zarruqiyyah.

“Never expect anything from the creation of Allah , but rather expect things from the creator, Allah !”1 He also wrote two works on the Qur’an; Sharh Surat Al Faatihah and Tafsir Al-Qur’aan. He wrote of his travels in two major works, Al-Kunnaash and Ar-Rihlah.